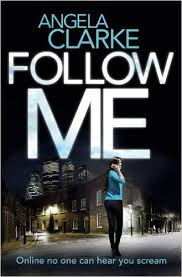 The ‘Hashtag Murderer’ posts chilling cryptic clues online, pointing to their next target. Taunting the police. Enthralling the press. Capturing the public’s imagination.

But this is no virtual threat.

As the number of his followers rises, so does the body count.

Eight years ago two young girls did something unforgivable. Now ambitious police officer Nasreen and investigative journalist Freddie are thrown together again in a desperate struggle to catch this cunning, fame-crazed killer. But can they stay one step ahead of him? And can they escape their own past?

ONLINE, NO ONE CAN HEAR YOU SCREAM …"

The minute the book cover reveal took place for Follow Me by Angela Clarke, I knew I just had to get my mitts on a copy. It sounded absolutely brilliant and I'm so pleased that I wasn't disappointed - it's a fast paced crime mystery novel that had me absorbed from the beginning.

The story follows Freddie- a chaotic, fairly lost woman who dreams of being a journalist but instead is serving coffee to rude customers, scraping enough pennies together to live on a sofabed in a tiny flat. She bumps into an old school friend, Nas, who is now a police officer and is rushing off to a crime scene. Sniffing out a story that could fulfill her journalist dreams, Freddie follows Nas and sneaks her way into the crime scene - a gory murder. Before she knows it, she's thrust onto the case, using her social media skills to help try and find the killer - Apollyon, who uses Twitter to broadcast his kills and give clues as to who is next.

This was a gripping story and I particularly loved the social media focus. Follow Me highlighted the dangers that there can be surrounding online activity and was a different and exciting way to portray crimes. It was well thought through and kept you on your toes constantly... would they find the person behind Apollyon...the 'hashtag murderer?'

Freddie is a brash character who lacks any sense of direction and ability to take things seriously. She is coasting through life, trying to make it as a journalist but not really succeeding. I enjoyed her being thrust into a whole new working environment and her trying to help solve the crime. At time she was, understandably, overwhelmed - particularly with the gory murder scenes. But, she used her skills and experiences to try and create leads and really got into the investigation. She is a complete contrast to Nas, who is a determined perfectionist, working incredibly hard to achieve a promotion within the force. I did feel that at times her character was a bit flat... there wasn't much going on with her apart from wanting to succeed. She's still likable though and you can really understand her frustrations with Freddie.

It's clear there's a secret that Nas and Freddie are keeping, which is the reason why they stopped being friends when they were younger. It's hinted at from early on in the story, but I never quite guessed what it would be. Once you find out you can see why they kept it to themselves, particular Nas, and it also explains their personalities and outlook on life.

I'll admit I had no bloomin' idea who the killer would be. When they find a lead and a potential killer, I was on the edge of my seat wondering if that would be it. I won't spoil anything, but just be warned that Follow Me certainly keeps you on edge right up until the very end - the plot twists and turns and throws many surprises your way.

A thoroughly enjoyable, gripping crime thriller with a dynamic edge. I really, really enjoyed it.

*A big thank you to the publishers of Follow Me, Avon, for an advance review copy of the book via Netgalley, in exchange for an honest review.