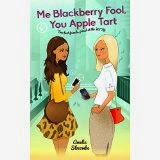 "Best friends Isla Butterfield and Rachel Ku are inseparable. Inseparable, that is, thanks to the wonders of modern technology and the humble smart phone.


Isla is a lawyer in a cutthroat city law firm, working 90-hour weeks in a job she hates. The rest of her time is spent dealing with her recently divorced father, worrying about premature ageing, wishing she'd followed her dream of becoming an actress and hiding her designer clothes' receipts from her long-term boyfriend, Toby - a biologist with mild OCD.


Rachel is stuck in a dead-end 9-5 marketing job for a manufacturer of commercial sink units. Her life is troubled by her crazy thoroughbred horse Aristotle (who she can't afford), her eccentric Malaysian mother with an internet shopping addiction, and her emotionally detached boyfriend, Spencer. Spencer never calls, is always late and prefers to spend his time at the beck and call of his best friend Alex Robertson, a well known and extremely good looking premiership footballer.


After a chance encounter with the notorious Alex Robertson, Isla is given a glimpse of a very different existence. But does she really want a life of money, celebrity hangouts and Harvey Nicholls' stylists? And if she does, how much is she willing to sacrifice to get it?"


Debut Author Amelia Slocombe recently released her first novel 'Me Blackberry Fool, You Apple Tart' for Kindle at the start of February. The book follows the lives of  Isla and Rachel through their regular email conversations, offering a humorous and different take of friendships, love and careers. Amelia kindly answered my questions about her book, and plans for the future...


1 - Your twitter bio 'City lawyer who fled London for Leigh on Sea, all in the name of love' intrigues me - can you share any stories with me?

I used to be a London girl through and through - I was brought up there, I went to school there, I socialised there.  Then I started working as a lawyer in the City and I saw a side to London I didn’t enjoy.  Long commutes, tube delays, stressful days at work, a diet that revolved around Pret and Starbucks.  But then I had an epiphany.  Sure, I had to work there if I wanted to earn a decent salary as a lawyer, but I didn’t have to live there!  So my husband convinced me to move back to his home town of Leigh on Sea.  The day I got off the train from work, heard the seagulls, smelt the sea and met my husband for an ice cold glass of wine in a little pub in Old Leigh, I knew I’d made the right decision.  I’ve never looked back.

2- Where did the inspiration for your novel come from? It seems to have some connection to your life - is that what made you choose to write it?
The first page of my novel says it all really - there are so many stories lawyers could tell that I think would genuinely shock people (the working hours are really not exaggerated) but they simply don’t have the time to put pen to paper.  I wanted to shed a bit of light on the profession, but do so in a lighthearted manner.  Oh, and my friend did genuinely go out with the best friend of a premiership footballer.  Her experiences inspired the plot.  She is just about still talking to me.
3- The novel is written by email exchange between the two main characters - what made you decide on this format?
I wanted to try something a bit different.  I knew some people would hate it, but I thought it might make me stand out from the crowd.  Especially because there are so many excellent chick-lit novels out there.  I also thought I could write it by email in a way that was realistic.  It’s how my friends and I are forced to communicate nowadays.  If we didn’t email each other, we probably wouldn’t speak for months!

4- This book is only available electronically,  why did you make that choice?
The book will soon be available in hard-copy.  I just haven’t gotten around to it yet!
5- This is your debut novel - how have you found the writing & publishing experience so far? Any tips for aspiring authors?
The writing experience took me a long time.  I am a bit of a perfectionist, and so every time I read the book, I couldn’t stop myself from making changes.  The best thing I did was give it to a few friends whose opinions I valued.  They gave me the confidence to publish it.  It was at that point, however, that I hit a bit of a brick wall.  I chose to self-publish because the process of finding an agent looked too daunting and by this point I was too impatient to upload it.  However, what I didn’t realise was how hard it would be to convince strangers to read it!  Simply telling people to read your book because it’s good doesn’t actually work!  My tip for aspiring authors is therefore to be very patient.  Don’t expect a bestseller straight away!  And also get to grips with the fact that if you self-publish, the actual publishing is the easy bit - it’s the marketing of the book that is the real challenge!
6- Do you have plans for another novel? If so, will it follow the same format and style as this novel?
I do have plans for a second novel.  I like showing the point of view of different characters, so that aspect of my writing will stay the same.  However, that’s probably where the similarities end.  The next one is going to be a lot more serious.  My mum passed away five years’ ago after being diagnosed with early onset dementia.  The next book is going to be about the disease, and the impact it had on my mum and the rest of our family.  I would still like to inject a bit of humour into it though - I would hate for it to be too depressing!

7- You're a lawyer and the book centres around this career - what inspired you to become a lawyer? How did you have time to write a book?
I wanted to become a lawyer to make a difference in the world (cheesy, but true).  What I discovered was that it’s actually a very hard, very stressful job.  Yes, lawyers in the City are well paid, but the hours are long, the people you work with are demanding, and the work you do is actually not particularly satisfying.  I wrote the book to make that very point.  People often ask me how I had the time to write it, especially because I also have a 2-year old little boy.  It was actually my commute that made it happen.  I wrote every day to and from work.  It took a long time, but I found that by dedicating myself to writing for two hours a day, I managed to get the whole book done over the course of a couple of years.

8- How do you enjoy spending your free time?
I love spending time with my husband, my son and my dog.  I work pretty hard during the week and so the weekends are all about lazing about at home.  I am also a bit of a foodie - I love eating out and trying new restaurants.

9- What's your favourite book genre and who's your favourite author?
That’s a really difficult question.  I have a passion for historical fiction because I love learning about different time periods.  My favourite author is probably Khaled Hossein, who wrote Kite-runner.  I like reading books that have an element of truth to them, even if the plot itself is fabricated.  I suppose it makes me feel like I’ve learnt something.

10- Tell us something surprising about you
I always wanted to be an actress.  I was given the chance to study at the Guildhall School of Music and Drama but my parents told me I’d be better off going to university.  So I gave it all up to become a lawyer.  I’m not sure it was the best decision!

Quick fire round:Coffee or tea? coffee - soya milk latte if I’m going to be really precise.  Not because I’m pretentious or lactose intolerant, I just really like the taste!
Paperback or Kindle? Difficult, but probably paperback.
Lazy day or 'out and about' day? Also difficult, but probably lazy.
In reference to your book title - Apple or Blackberry? Apple - I have an iPhone, an iPad and an Apple Mac!Fool, tart or pie? Neither - I don’t have a sweet tooth at all.  Can I have pizza instead?